His Holiness Patriarch Kirill of Moscow and All Russia 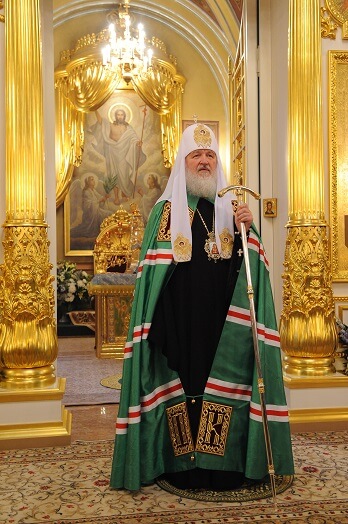 His Holiness Patriarch Kirill of Moscow and All Russia (secular name Vladimir M. Gundyaev) was born on 20th November 1946, in Leningrad.

His father, Rev. Mikhail V. Gundyaev, died in 1974. His mother, Raisa V. Gundyaeva, a teacher of German, died in 1984. His elder brother, Archpriest Nikolay Gundyaev, is a professor at St. Petersburg Theological Academy and rector of the Holy Transfiguration Cathedral in St. Petersburg. His grandfather, Rev. Vasily S. Gundyaev, a Solovki prisoner, was imprisoned and exiled in the 20s, 30s and 40s for his church activity and struggle against Renovationism.

After finishing the secondary school eighth grade, Vladimir Gundyaev got a job in the Leningrad Geological Expedition and worked for it from 1962 to 1965 as cartographer, combining work with studies at secondary school.

After graduation from school in 1965, he entered the Leningrad Seminary and later the Leningrad Theological Academy, from which he graduated in 1970 with excellence.

On April 3, 1969, Metropolitan Nikodim (Rotov) of Leningrad and Novgorod tonsured him with the name of Kirill and on April 7 ordained him as hierodeacon and on June 1 as hieromonk.

From 1970 he became a candidate of Theology at Leningrad Theological Academy.

From 1970 to 1971 Father Kirill taught Dogmatic Theology and acted as rector’s assistant for students’ affairs at the Leningrad Theological Schools and at the same time worked as personal secretary to Metropolitan Nikodim and supervising instructor of the first-grade seminarians.

He was elevated to the rank of archimandrite on September 12, 1971.

From 1971 to 1974, he was Moscow Patriarchate representative at the World Council of Churches in Geneva.

On March 14, 1976, Archimandrite Kirill was consecrated Bishop of Vyborg.

On September 2, 1977, he was elevated to the rank of archbishop.

From December 26, 1984, he was Archbishop of Smolensk and Vyazma.

From 1986 – administrator of the parishes in the Kaliningrad Region.

From 1988 he became Archbishop of Smolensk and Kaliningrad.

On November 13, 1989, he was appointed chairman of the department for external church relations and permanent member of the Holy Synod.

On February 25, 1991, Archbishop Kirill was elevated to the rank of metropolitan.

On January 27, 2009, the Local Council of the Russian Orthodox Church elected  him Patriarch of Moscow and All Russia.

His Holiness Patriarch Kirill was enthroned on February 1, 2009.